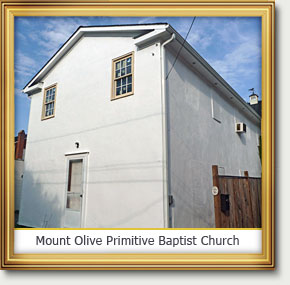 Mount Olive Primitive Baptist Church of Leesburg, Virginia (pictured) began with a small number of dedicated Christians who had a desire to worship God together. In 1884, under the leadership of Elder Alfred Wright, a small building in Leesburg was purchased for worship services. This building, which continues to stand on the east side of Liberty Street between Loudoun and Market Streets, served as the Mount Olive Primitive Baptist Church for almost 70 years. During those years the church was a member of the Second National Catoctin Association.

God showered blessings on the humble, spirit filled church through the ensuing pastorates of Elder Jerry Jones, Rev. Wash Johnson, Elder Carroll Lee, and Elder Harry Williams. In 1938, Rev. Howard Twyman was called as the sixth pastor of Mount Olive. During the late 40s, the church began to experience growth and the need for a larger place of worship became a challenge to this man of God. On June 16, 1949, under his leadership a lot was purchased on Loudoun Street in Leesburg, Virginia. Ground-breaking ceremonies were held in early 1950, and the church building was completed in 1953. During Rev. Tyman’s pastorate, the church moved its membership affiliation to the Northern Virginia Baptist Association. At that time, some members in opposition to the association change organized a separate congregation. Mount Olive Primitive Baptist became First Mount Olive Baptist Church and the new congregation formed as Second Mount Olive Baptist Church, which still exists today. Rev. Twyman spent many hours in working at the church during its construction. He served faithfully as pastor until his death on May 1, 1968.

Rev. Earl King was ordained as assistant pastor in 1967, and served as Acting Pastor during the illness of Rev. Twyman. After his death, Rev. King was called as Pastor in 1969 and served until his resignation in 1973. Rev. Dalvin Brent served as Acting Pastor until Rev. Chauncey Hierst was called and installed on June 3, 1974. Under the leadership of Rev. Hierst, God blessed First Mount Olive to expand the building by adding an addition to the back of the church that included additional offices and restrooms. After a brief illness, God called Rev. Hierst to eternal rest in September 1989. Rev. Harold S. Stinger, a son of the church, accepted the Pastorate call in December 1989, and was installed as Pastor on June 10, 1990.

The following have served as associate ministers under Rev. Stinger’s leadership:

* These associate ministers have gone home to glory.

First Mount Olive has experienced continuous spiritual and numerical growth under the dynamic leadership of Rev. Stinger. In 1991, an adjacent lot was purchased for purposes of extending the parking lot. The paving was completed in 1993.

Like Pastor Twyman in the 1940s, Pastor Stinger was faced with a need for a larger place of worship. In August 1995, the membership voted to enlarge the building. The last service in the old church was held on Easter Sunday, March 30, 1997. The very next day, the contents of the church were moved into storage in preparation for the construction effort. Beginning on April 6, 1997, worship services were held in the Leesburg Fire Department building located across the street from the church. This served as the place of worship during the entire construction period.

On the First Sunday in March of 1998, the First Mount Olive Church family, along with over a thousand friends and well-wishers, marched across the street from the Firehouse to the new building, which God had enabled building. The Town of Leesburg Mayor James Clem declared the Day, “First Mount Olive Day”. The oldest and the youngest members of the church cut the restraining ribbons as everyone marched into the sanctuary. The new building enabled the membership to accommodate increased growth, ministries and activities.

God has continued to bless the church in a mighty way with spiritual and numerical growth. The church has expanded its outreach through Christian Education, Discipleship, Evangelism, Stewardship, Missions and Urban Outreach.